An 81-year-old Leicestershire man has been found guilty of non-recent indecency offences on young boys.

Michael Hudson worked as a canoe instructor in North West Leicestershire from the 1970s to the 2010s.

In 2020, Leicestershire Police received a report from a man reporting that he had been indecently assaulted on a number of occasions by Hudson when he was a teenager.

That investigation then led officers to contact another victim, who did report the offences against him to a third party in 2017 however wasn’t able to support the investigation at the time.

Following contact from officers he too agreed to support the case and provide evidence against Hudson.

Following a lengthy investigation, Hudson was charged with 10 counts of indecent assault on boys under the age of 16.

Today (Friday, September 30), Hudson, of Sycamore Drive, Moira, admitted his involvement in all the offences.

Speaking on behalf of the force, Detective Sergeant Anna Blockley, said she was pleased that Mr Hudson had been found guilty of the offences.

“This was in no way easy for the victims and has been a deeply traumatic time for them. I applaud their courage in coming forward. I hope this outcome will now help them move on with their lives and reassure them that their concerns were taken seriously, no matter how long ago the offences occurred.

“Hudson was an instructor at various canoe clubs in North West Leicestershire between the 1970s and 2010s.  We strongly believe there may be other victims of Hudson out there who for whatever reason haven’t come forward and reported the offences.

“If this is you then we encourage you to come forward.  Please be assured your report will be dealt with by specialist officers who will support and guide you throughout the process.”

The Child Abuse Investigation Unit historic crimes team deal with all non-recent reports where the offences have occurred against children.  A dedicated team of officers help and support victims, and also liaise with partner agencies to ensure that support continues even after the case has been dealt with. 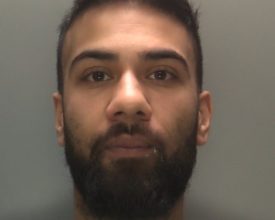