A Closure Order has been granted for a house in South Wigston following repeated complaints about the persistent anti-social behaviour relating to the property, including drug misuse, dealing and prostitution.

Officers from Oadby & Wigston Borough Council together with Leicestershire Police, jointly took action to secure a three-month Closure Order for the property in Station Street, after the tenant ignored repeated advice, warnings and offers of support, and continued to engage in and allow anti-social behaviour to occur at the property.

Complaints relating to the tenant, Danielle Taggart, 32, included noise-nuisance, drug misuse and dealing, prostitution, burglary and criminal damage, often occurring late in the evening or in the early hours of the morning.

At a hearing at Leicester Magistrates’ Court on Wednesday (March 30), the Council’s Assistant Solicitor, Samuel Ball, told the court how families living nearby had suffered “upset, alarm and distress on a continual basis for a number of months, affecting the enjoyment of their own properties and homes”. This prompted action from the borough council and police.

The Closure Order now means that from noon on March 30, no one is allowed to enter the property, including the tenant. On granting the order, Magistrates warned that anyone breaching the order could be arrested and, if found guilty, could face a punishment of up to 51 weeks in prison and/or an unlimited fine.

Thomas Maccabe, the council’s Anti-Social Behaviour Officer, said: “Residents in Oadby & Wigston should be able to live in safe communities, free from the fear and nuisance caused by others. We’re pleased with the court order and we hope this brings some peace and normality back for those living in nearby homes.”

The Council’s Head of Law & Democracy, David Gill, said: This Order sends a clear message that anti-social behaviour will not be tolerated and, together with our partners, we will continue to use all legal remedies available to robustly deal with anti-social behaviour to protect our communities.” 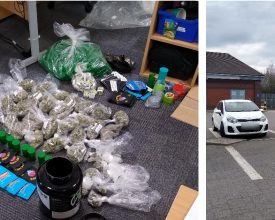