Nine people were arrested following an incident in Belgrave Gate, Leicester ,which saw which three people stabbed during an early hour altercation.

Police were called at 4.08am on Sunday morning (June 5), to a report of a fight in Abbey Street, Leicester.

Officers attended the scene where two men, both in their 20s, were found in Belgrave Gate with stab wound injuries. Both were taken to hospital where they currently remain. One of the men is reported to be in a serious but stable condition. The second man suffered injuries which are not believed to be life-threatening or life-changing.

A third man, in his 20s, presented himself at hospital shortly after the incident. He reported he had suffered a stab wound injury in the incident. He currently remains in hospital. His injuries are not believed to be life-threatening or life-changing.

A full investigation has been launched and detectives are appealing to anyone with any information regarding the incident to make contact.

Detective Inspector Simon Pearson said: “We are carrying out a full investigation to establish what has happened.

“The incident happened during the early hours of this morning in the city centre. If you were in the area please think back to anything you may have seen or heard which could help our enquiries. If you have any CCTV footage and have not yet spoken with police of if you were driving in the area and have any dashcam footage then please also make contact with us.

“This incident will understandably cause concern. We have officers in the area speaking with people and offering reassurance. Please speak with them and please be assured that we have a full investigation ongoing to establish the full circumstances of this incident.”

Anyone with any information should contact police quoting incident 135 of 5 June. You can call 101 or report online at www.leics.police.uk 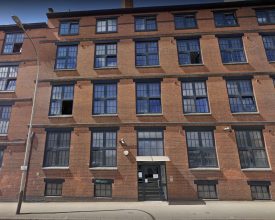