A unique ethical and sustainable fashion project has launched in Leicester, which will support trainee garment workers in the city, giving them the tools to ‘rise out of poverty’.

The Dorcas Dress Project launched exclusively at Leicester’s John Lewis store yesterday (Thursday, April 21) by textiles specialist Maria Skoyles. Her unique dress, will be created at a factory in the city’s Belgrave Road area, where many of the workers don’t speak English.

Maria’s dresses will be showcased at John Lewis for 8 weeks until June 16, where customers will be able to understand more about the Project, and how it is benefitting the local community.

A percentage of the profits made from sales of the dresses will be used to provide English lessons for the workers, helping to address social isolation, and to create a fairer, and more inclusive community.

A percentage of the sales will also go directly to the workers themselves.

“It seemed really sensible to come to Leicester because it is historically a centre of clothing manufacturing”, Maria told the Leicester Times.

“Our ethos as a brand is to support the people who make the clothing, which is something which is uncommon in the industry. We have a very transparent pricing policy, which ensures that all our dressmakers receive 30 per cent of the garment retail price.

“The reason we’re manufacturing in Leicester, is also to help us provide English lessons for many of the garment workers that work in the city, who currently don’t speak English”, she added.

“This dress is about honouring the dressmakers and the people that make our products, and supporting them to become independent, and valuable members of their communities”.

According to Maria, there were an estimated 10,000 garment workers in Leicester in 2019.  Since April 2020, The British Retail Consortium estimated that garment workers had lost £27million, due to employers not paying the minimum wage. “It has been identified that the very workers producing the clothes we often take for granted”.

Bob Gill, Branch Manager for John Lewis, said: “The Dorcas Dress Project is making a real difference in both the local community and on a global scale – we’re thrilled to be hosting Maria’s work and helping our customers understand more about this great project”.

As well as being an ethical product, sustainability is also at the heart of The Dorcas Dress Product.

It has been designed with no zips, allowing it to be ‘size adjustable’, so that it be worn through all stages of life.

Adam Clark, Leicester City’s Deputy Mayor, praised the product, during its launch at John Lewis, which was chosen due to its ethically minded, and environmentally aware customer base.

“What people want in the city is ethical, sustainable fashion creating really good jobs and driving out any bad jobs”, he said, referring to the shocking lack of regulations for factory workers in Leicester, which came to light in 2020.

“The Dorcas Dress Project is a perfect example of an organisation that believes in Leicester, bringing their amazing charitable initiative to the city and we’re really delighted to welcome them here”, he added.

“The new recycled polyester jersey dresses are a perfect example, and really a metaphor that enable us to understand what we need to do to overcome those big social and environmental challenges that we face.

“We’re not just celebrating a garment. It’s something so much more than that”.

To find out more about The Dorcas Dress Project, visit: https://www.crowdfunder.co.uk/p/supporting-garment-workers-in-leicester 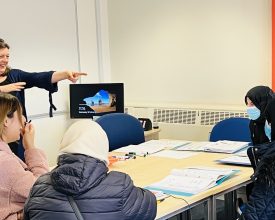 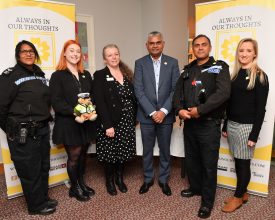 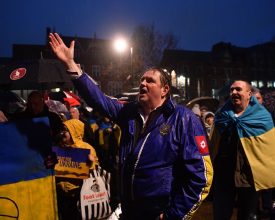