Leicester’s world-famous Diwali light switch on took place at the weekend, lighting up the faces of over 20,000 people who attended the dazzling spectacle – some from as far away as Mumbai.

The city’s Diwali Light Switch-On took place on Sunday (October 9), with the Golden Mile being illuminated by rows of dazzling and brightly coloured lamps, to represent the ‘triumph of light over darkness.’

People came from as far as Mumbai for the event, which is celebrated by millions of Hindus, Sikhs and Jains across the world.

Leicester’s event however, is one of the biggest outside of India.

Nishan Canagarajah, vice chancellor of the University of Leicester, was tasked with switching on the lights, something which he labeled as a “proud moment” and a “huge honour.”

“I feel humbled, and honoured and it feels lovely to represent Leicester in this way,” he said.

“The Diwali festival shines light on Leicester for the world to see, and shows Leicester at its best. That is why The University of Leicester is proud to support this event.

“It’s brilliant, it brings all people together – not just Indian people – white people… everybody from Leicester is here to celebrate tonight,” he added. “That’s the nice thing about Leicester – it brings communities together around this festival.”

The University of Leicester sponsored this year’s Diwali light switch on, which has been unable to go ahead for the past two years due to Covid-19.

Often referred to as the ‘festival of lights’, Diwali is a holiday which celebrates the spiritual “victory of light over darkness, good over evil, and knowledge over ignorance”

Speaking from the stage, Peter Soulsby, Leicester City Mayor, said:  “After a few very difficult years, here we are again. After a time of darkness, celebrating the triumph of light over darkness. This is very special for all of us, and it’s brilliant to be here.”

“After the pandemic, it is good to be together again, and to celebrate Diwali and to make up the loss of time,” added Piara Singh Clair, Deputy City Mayor.

Alongside the switch on, colourful dancers took to the stage, entertaining the crowds with joyful and energetic routines.

Fireworks also lit up the night sky, and giant puppets paraded through the crowds.

The Wheel of Light was also a big hit with festival goers, some of which came from as far away as Mumbai.

“We love the overall enjoyment, the food and excitement of putting the lights on and everything, it’s all good!” said Tushar Shah, who travelled from Birmingham for the Leicester festivities.

“We like to come here every Diwali occasion to celebrate here, because we believe this is the biggest celebration out of India, and it just brings back memories from India.”

“There are so many lights and it just makes everyone joyous and brings smiles to everyone’s faces,” added Chinamy Khiste, who travelled from Boston.

“It was a long journey to get here, but it was definitely worth it.” 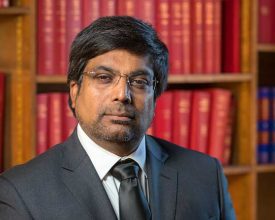 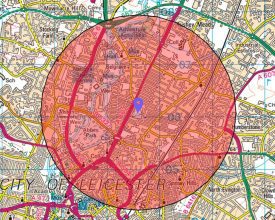 NO DRONE ZONE IN PLACE FOR LEICESTER’S DIWALI CELEBRATIONS 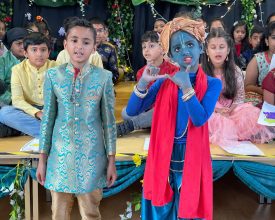