LEICESTER MARKS EARTH DAY WITH GIANT GLOBE MADE FROM WASTE

A giant globe made entirely from waste that’s been collected from Leicester’s parks and waterways has been installed at the city’s Abbey Park, to remind people to think about the environment on Earth Day.

Measuring three metres in diameter and made of colourful bottle tops, food packaging, crisp packets and other household waste, the globe has been installed in the city’s Abbey Park to mark ‘Earth Day’, which is today (Friday, April 22).

Material for the globe was collected by the city council’s environmental rangers with the help of the Leicester Environmental Volunteers. All the items were sorted and cleaned, before volunteers transformed them into a giant artwork that depicts the world’s landmass and oceans.

Deputy city mayor and lead on the environment Cllr Adam Clarke said: “One of the most visible signs of the climate emergency we’re facing is the amount of waste that finds its way into watercourses and eventually ends up in the ocean.

“Not only is it an eyesore and a hazard to wildlife, this litter can also cause flooding, so it has the potential to have a huge negative environmental impact.

“We’re lucky to have lots of committed volunteers in Leicester who want to help, including the Leicester Environmental Volunteers, who work with our parks team to clear litter from rivers and waterways in the city.

“But none of this waste should end up in our waterways – we all have responsibility for recycling or disposing of our waste properly.

“This giant globe sculpture reminds us that there is much, much more that we can do to protect our environment – and as we mark Earth Day, it’s a good time to think about the small changes we can make in our lives that will make a huge difference to our environment in the long term.”

The globe sculpture will float on the river at Abbey Park until mid-June.

Earth Day, encourages people around the world to focus on the planet and the challenges it faces.

Earth Day will also be marked at Leicester’s Guildhall, with a special event for young children. Our Fantastic Planet will offer planet-friendly craft activities and the chance to learn about the world’s plastic-free past.

The event runs from 11am to 3pm today. Admission is £3 per child. 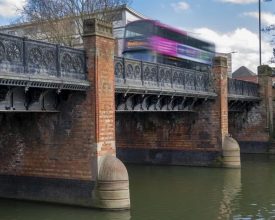 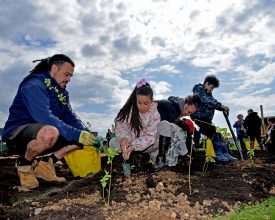 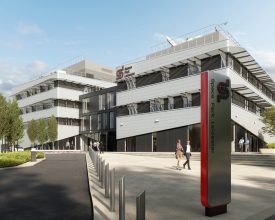