A Leicester graduate is celebrating after his pharmacy was named the best in Oxfordshire – just a year after he purchased it.

Yasin Jussab and his team at Topside Pharmacy, based in the small market town of Chipping Norton, took home the regional crown at the Thames Valley Pharmacy Hero Awards, which is judged by representatives of the Oxfordshire Clinical Commissioning Group.

The awards, created in 2021, recognise the work of community pharmacies and their impact on patients’ wellbeing. Having received his award and £200 prize money, Yasin credited his time studying at Leicester’s De Montfort University with helping Topside secure the award.

“I always found DMU’s approach to teaching pharmacy very patient-focussed, so when I was studying there, I was picking up those soft personal skills to make my patients feel as comfortable as possible,” he said. “Those soft skills, like defusing situations or taking the time to get to know your customers, are so important.

“Of course, we learnt the chemistry and biology behind medicines too but there was always a focus on humanising situations, and that’s the foundation that I’ve built my own pharmacy on.

“I really do love serving the community in Chipping Norton. It’s such a tight-knit group here where everyone knows one another. We try our best to be as accessible and efficient as possible, introducing a delivery team for when people can’t come and get their meds.”

To qualify for the award, members of the public have to nominate their chosen pharmacy to Thames Valley Local Pharmaceutical Committee and explain why it deserves to win.

Yasin added: “Winning the award was a complete surprise. I didn’t even know I was nominated until three days before I received the award and even then, I thought they were joking!

“I just want to say a massive thank you to everyone who nominated us.

“To know people took the time out of their day to recommend me is truly heart-warming. It hasn’t really sunk in yet. My staff have created a very warm, friendly atmosphere where residents feel comfortable just coming in for a little natter when they can.”

Yasin came to DMU with his identical twin brother Feroz, where the pair both studied Pharmacy MPharm (Hons).

After graduating, Feroz landed a job at Lloyds Pharmacy while Yasin worked his way up to becoming a pharmacist manager for a Co-Operative Healthcare pharmacy in Chipping Norton.

But, four years into his managerial role, the company’s head office decided it would sell off the store and withdraw its operations from the town.

Yasin was faced with two options; let the pharmacy close and watch his hard work in the town fade away or gamble and buy out the closing pharmacy with his own life savings. 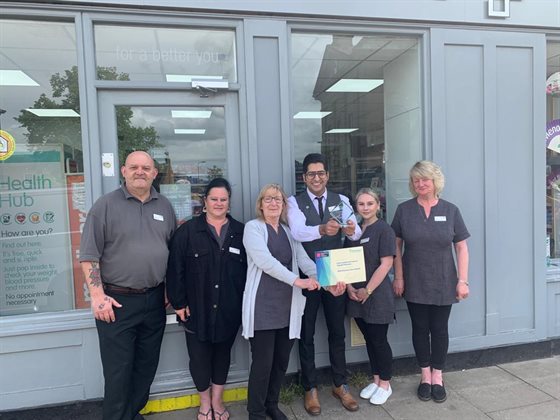 Yasin and his team at Topside Surgery

Having settled in Chipping Norton and just bought a house in the town, he decided to gamble. Backed by his parents, he invested his, and his family’s money into buying the store from the Co-Op in 2021.

Just one year and one re-brand later, Topside Pharmacy is thriving. Its client base has grown, as has its revenue, which is 51 per cent higher than it was before Yasin decided to buy it out. The atmosphere is so nice in fact that even Feroz decides to commute down from Lutterworth and lend a hand on a Saturday.

While Topside can include the Pharmacy Hero Award in its long line of boasts, Yasin is still keeping his feet firmly on the ground to ensure his customers continue to get the best level of support.

He said: “The journey hasn’t stopped here, as my parents would say. Winning the Hero Award is my proudest achievement to date but we’ve grown to a team of nine and I want to continue to invest in my team and ensure the service is slick and efficient.

“Buying out a pharmacy, especially in the current climate, was a big gamble. Margins are tight and there is pressure having used some of my parent’s money to complete the purchase but the impact we are making here has been felt.

“Covid has been a hard time for a lot of people, so my team has been out delivering medicines, staying late to make sure everything is accounted for and that, in turn, has been recognised by the lovely residents here.

“I love serving the people of Chipping Norton and hope to stay here for many years.” 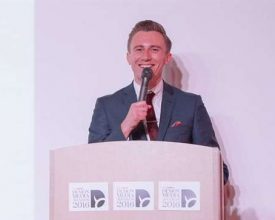 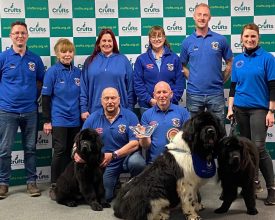