Syston’s mysterious ‘Knitting Banxy’ (SKB) says she is “still pinching herself” after one of her postbox toppers ended up on the cobbles of Coronation Street this Christmas.

The spectacular knitted creation, was featured on the Christmas Day episode of the long running soap, which is loved by millions across the UK, including SKB herself.

The elusive knitter – who chooses to keep her identity a secret, has been a fan of the popular ITV show for 30 years.

“I’m still pinching myself,” she said following the episode, which saw her piece positioned on a postbox outside the corner shop, on the fictional cobbles of Weatherfield.

“I’ve been a fan of the show for over 30 years and so I feel honoured to have been asked, and it was a privilege to deliver,” SKB told the Leicester Times.

“I carried the secret since October and didn’t know if or when it would be aired, so when it appeared at the end of the Christmas Day special, there was a cheer in my house from my family.”

The knitter, said that the experience was one of the most exciting things to have happened to her, since she started creating post box toppers, and placing them in various villages across Leicestershire in 2019.

However, other highlights include getting a ‘thumbs up’ from actor Stephen Graham for a piece she created to honour him in his home village of Ibstock back in 2021.

More recently, she was lucky enough to meet the cast of the BBC’s ‘Ghosts’, after producing a Halloween topper featuring the nine ghost characters in the hit show. 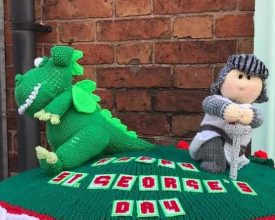 Leicester Family “Over the Moon” After Winning Festive Garden Makeover 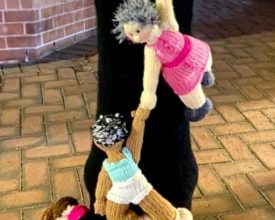